Tripoli, 11 July 2022 – When Ime* left Nigeria in 2016, she did so in the hopes of finding new ways to provide for her family. At only 18, she owned a hair salon back in Nigeria, where she practiced her hobby turned craftsmanship for four years. Due to the challenging socio-economic situation in the country, Ime was forced to abandon her business and find her way to Europe.

One day in 2016, she met with a close friend who offered to pay for her transportation to Europe as well as a job abroad. She was very excited about the offer and gladly accepted, thinking her future would drastically improve if she went to Europe. She started making dreams about her new life as she planned her next steps.

Although Ime's family wasn’t happy upon hearing the news, fearing what might happen to her en route, Ime was determined to go and turn her life around. From Lagos, she travelled to Agadez in Niger, and then further on to Sebha in Libya.

“We spent more than a month on the road and faced many challenges. We were sitting in the back of the truck in the blazing sun. I was frightened each time I looked over at my friend who had travelled with me from Nigeria and the rest of the girls; I could read exhaustion across their faces,” Ime recalls. “We were praying out loud to forget about our worries, which angered the smuggler and he tried to silence us. Those were the worst days of my life.”

It was 2016 when she first laid eyes on Sebha, and a week after, on Tripoli, and then later, on the boat that would take her on her first attempt to cross the sea. Having heard success stories from people who had made it to Europe, Ime felt confident that it would go well. Hours into her journey, the boat malfunctioned, and they found themselves stranded at sea. The Libyan search and rescue guards found them and returned them to shore.

“I was just happy to be alive,” she says.

According to the International Organization for Migration’s (IOM) latest Maritime Update, over 9,000 migrants have been returned to Libya between January and June 2022, including 656 women and 342 children. Upon return to shore, they were all assisted by IOM's direct assistance and mental health and psychosocial support team.

After her first attempt to cross the waters to Europe, Ime was brought back to Tripoli and detained for a few months until she was hired by a Libyan family as a housekeeper. Her sole purpose was to work and save enough money to try to cross again.

In 2017, Ime met a Ghanaian man whom she married. When her husband lost his job at the beginning of the COVID-19 pandemic, the two struggled to make ends meet. She finally managed to put aside enough money to cross again, always with Europe in mind, and convinced her husband to accompany her. 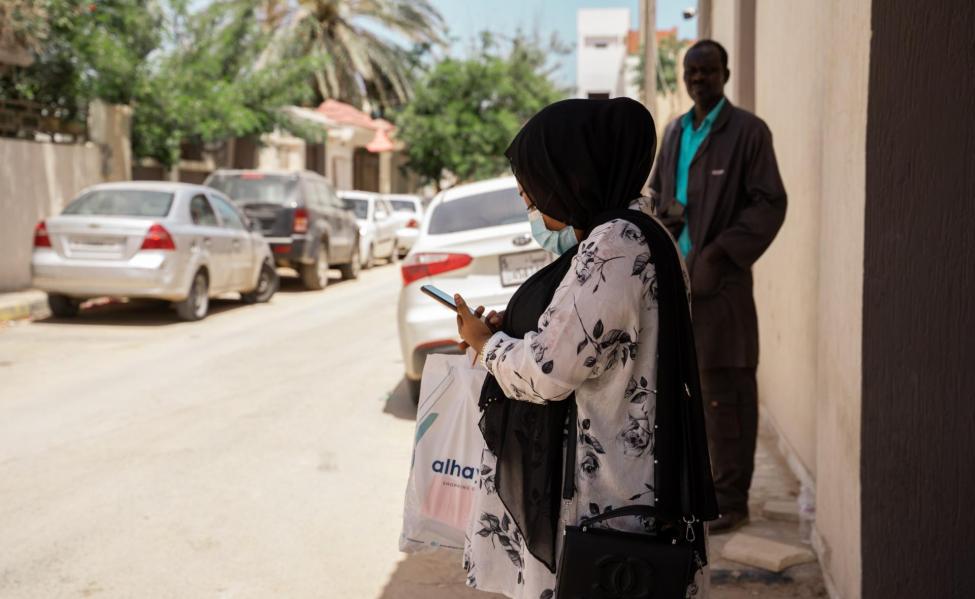 In 2020, Ime found out that she was pregnant with her first child. She and her husband were thrilled about the news and excited to have a child, but sadly, Ime lost the baby at 28 weeks.

“I felt hopeless and cried myself to sleep each night. The only person I could rely on was my husband who convinced me to try again for a baby.”

Later that year, Ime’s dream of getting pregnant again came true while her dream of travelling to Europe was slowly taking shape as well.

Her husband was reluctant to let Ime travel to not risk losing the baby again, but Ime had already made up her mind. She was relentless. In March 2021, together with her husband, she tried again to cross the waters, with more nerves and anxiety this time around. “I kept praying to God to save us.”

After 48 hours, as she was getting excited about reaching Italy’s coast, the Libyan coast guards returned them to Tripoli. Once they reached Tripoli, she met with IOM staff who help migrants returned to shore, but she decided to not tell anyone about her pregnancy. A few weeks later, Ime lost her second baby.

Fast forward to 2022. Ime was expecting for the third time, but this time around she discussed her situation with her Nigerian friends who advised her to seek IOM’s assistance. This past February, she decided to visit IOM’s office in Tripoli and the staff referred her to an IOM gynecologist.

When Ime first met with IOM’s Dr Sarah Alnaemi, she was 10 to 11 weeks pregnant. “Most migrants come to our office for the antenatal follow-up to take the essential drugs we provide and to prep them for delivery. We refer them to the hospital to help them have a safe delivery,” says Dr Alnaemi.

“We accept all cases referred to us by IOM. Most of the time, we admit the patient at the time of delivery, but we conduct all sorts of procedures, depending on individual needs,” explains Dr Ramadan Elgantri, Obstetrics and Gynecology Consultant at a private clinic in Tripoli.

Managed by IOM, the office assisted over 7,000 migrants in 2021 alone, who just like Ime, found themselves stranded with no means to continue their journey abroad nor go back home.

IOM’s health team in Libya continues to support migrants and ensures that all migrants have the right and access to health care. Since January 2022, the team has assisted 431 pregnant migrants and referred 272 for delivery.

Now 28 weeks pregnant and in a stable condition, Ime finally allows herself to feel excited again about the future and about her most important dream coming true: to have a baby. As for crossing the sea again, she has not yet decided. Time will tell, she says.

The Voluntary Return Story of Jamilu: From Libya to Nigeria